Deer In the Headlights

By George Witt. We all know that look. We get it from customers from time to time.A guy drives up, parks out front and asks, “I’ve got a tail light out, can you put one in for me real quick?” You say, “Sure.” After it’s put in, you tell the guy, “All fixed and we checked all the other lights, too. Everything’s good. That’ll be $13.00.” The guy gives you the “Deer In the Headlights look” (DIH) and says…

“Hey, I can get that bulb for 49 cents at the MegaParts store. I’m not paying you that much, that’s robbery!” Great way to start the day. An argument ensues.

Next customer arrives with smoke rolling out from under the hood and a trail of coolant heads for the curb while you write it up. He says he doesn’t need an estimate, “just do what it needs”.

You nod, write it up and give it to your tech. He replaces the split upper radiator hose.

You present a bill to the customer for .8 labor, a hose and some coolant. The guy gives you the “DIH” look and says “that’s outrageous!!!” I can get a hose real cheap at the MegaParts store. Sheesh. He told you to do what it needs… Another argument ensues.

Later in the day, the guy with the radiator hose repair returns with smoke again coming out the hood. He reminds you his name is Sam Ting in a loud voice— “I pay you to fix car, now car do Sam Ting!! Now you fix, I no pay!!”

About this time, you’re seriously thinking that a job selling shoes is looking better and better. No job could be tougher than being a Service Advisor on a day like this.

The fixes are surprisingly easy and anyone can do them.

First, always give an estimate “line by line”. That means that each and every customer concern that’s written on a repair order gets an estimate in advance. When you do this, you and the customer are agreeing on what’s going to be done and how much they’ll pay you for it. A deal is a deal and it’s easy.

You’d hesitate to order off a restaurant menu that didn’t have prices, wouldn’t you? So why is getting a car fixed any different? Yet, we do it to ourselves every day—we set ourselves up for “the big argument” when the customer picks up the car.

We need to negotiate from a position of strength. When the car is sitting outside, broken, smoking and leaking, we have the position of strength. It’s been my experience that people will agree to almost anything if you haven’t touched the car yet. However (and this is a big one), once it’s fixed, the customer has already gotten what they want, so your wallet is fair game. And, believe me, many of them know how to play the game.

Some know the game so well, they add hidden rules. When ever a customer tells you “they don’t need an estimate”, what they’re really telling you is, “money is no object, I’ve got 20 bucks.” Give that guy a very high estimate and you’ll find out real quick if he’s for real or not. Most of the time, they’ll have a stroke at the price and you’ll know they wanted to set you up. You win.

In the first example, quote the guy with the tail light 13 bucks right when he asks you to fix it. If he says that’s too much, it’s a pretty short argument—Thanks for coming in. Go to the next customer.

The reality is that the guy will probably agree to pay you and have it done. He’s learned if he doesn’t get an estimate, he can argue the charges down lower. Shoot, if you’d told him a dollar, he’d probably have squealed.

Next case, the guy with the radiator hose. This one is your fault, because you didn’t fix enough. A hose can get old and split or a car can overheat and split a hose. All we know is we have a leaking hose, but we don’t know the true cause.

At my shop, we have a whole sheet listing all the things we check to determine why an engine is overheating. We charge about $60 to do this and show the customer the sheet. Once they can see what you’re doing, the sale is easy. People have learned that “diagnostic charges” are a walletectomy—money will be removed from their wallet and they feel like they get nothing in return. What we’re doing is selling a list of things we’ll check and inspect. Once they see the sheet, it’s an easy sale. In fact, I can’t remember anyone not buying it or needing any big sales pitch.

This does 3 things—first off, it enables your techs to take their time and actually fix the car. Second, it sets you up for multiple sales. If you start through the list and find a sticking thermostat, you call and sell it and tell the customer you’ll continue through the tests and may be calling them back again. You can’t tell if the radiator is exchanging heat if the thermostat is stuck shut. Third, you get paid for it. Wow!

So, you now increase sales by selling a “series of tests” (rather than diagnostic time), selling what the car actually needs (in addition to the hose) and eliminate arguments. Remember, if he doesn’t buy your recommended repairs, he’s still agreed to pay the 60 bucks. He can’t bring it back screaming when it still overheats. The car may not be fixed, but “Sam Ting” is.

These tips are just a few of the many great ideas in my Service Advisor DVD and book. Make your job easier, your customers happier and your wallet fatter. Don’t think of it as a DVD, it’s a headache remedy and cash machine that will work for you every day. Check out George’s products here. 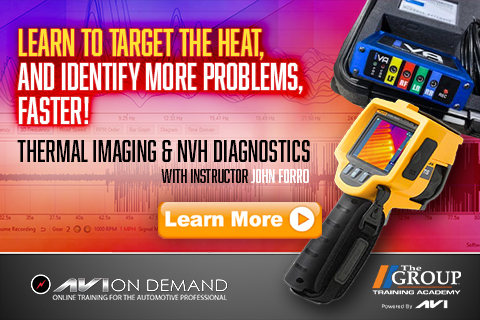